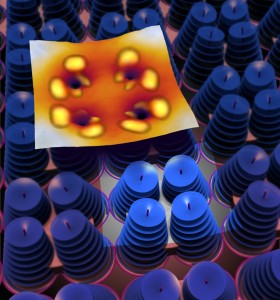 Pictured is the illustration of edge-pinning effect of focal conic domains (FCDs) in smectic-A liquid crystals with nonzero eccentricity on short, circular pillars in a square array, together with surface topography and cross-polarized optical image of four FCDs on each pillar. The arrangement of FCDs is strongly influenced by the height and shape of the pillars.

While liquid crystals are most known for controlling light propagation in displays, their electro-optic and mechanical anisotropies offer powerful tools to direct the assembly of soft materials. Focal conic domains (FCDs) are some of the first textures identified in liquid crystals, but until recently they were largely geometric curiosities, albeit elegant ones. In the past few years it has become clear that the control of these textures, which are too organized and reproducible to be called defects, can be used to create new surface patterning motifs with novel optical properties, new wetting properties, and the ability to template geometry and topology into the bulk.

In our recent article in PNAS, we present a new level of hierarchical assembly of the FCDs with controllable eccentricity and with inter-domain spacings shorter than the topographical features of the substrate. We observed a variety of new self-assembled domain arrangements produced by the interplay of the local influence of substrate topography with the global packing of domains. The ordering and patterns that we can create are like the difference between spherical colloids and rods — the anisotropic domains impart an entirely new set of degrees of freedom towards the formation of 3D networks and more complex geometries. The success of our modeling of the data brings not only greater understanding of FCDs, but also promises the ability to develop top-down, prescribed soft structures.