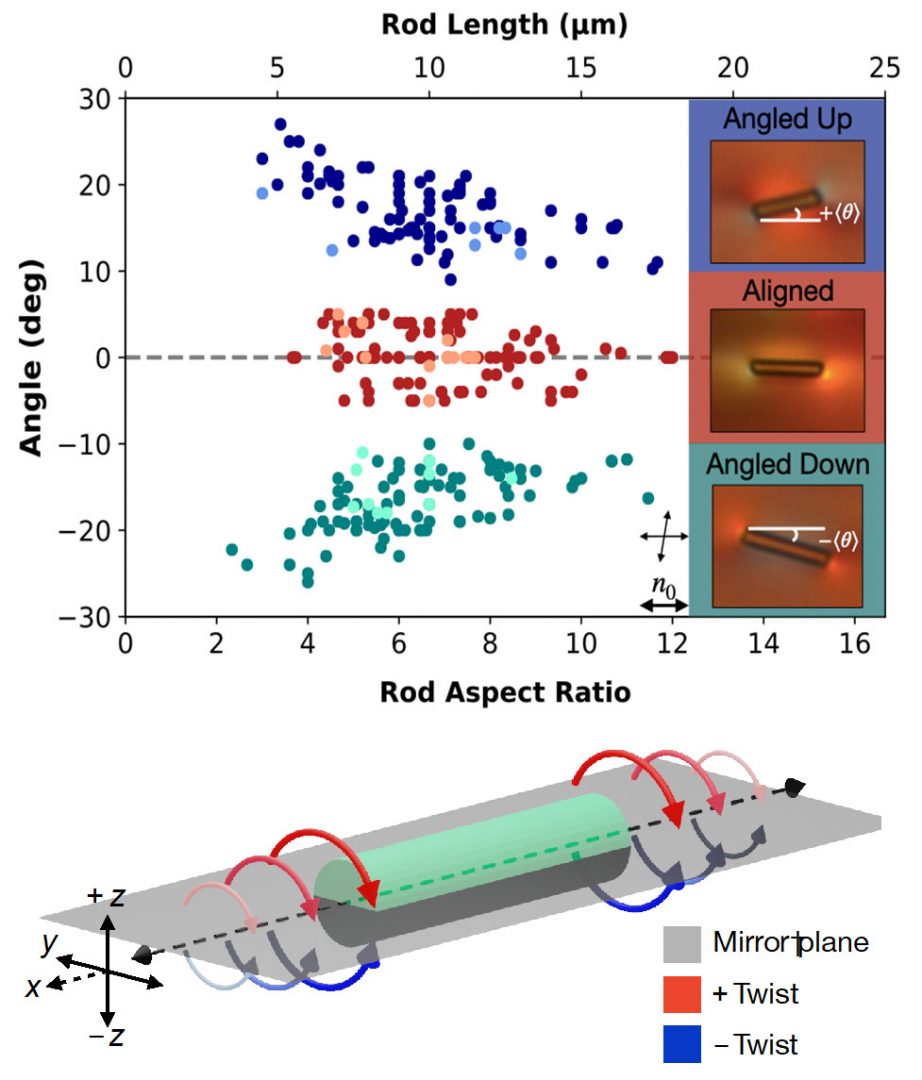 Top Figure: Dependence of rod orientation angle on rod length or aspect ratio.  The diameter of all rods is 1.5 µm. The insets show de-crossed analyzer images (top view) of the three types of rods; in these images the colors indicate the handedness of the twist deformation. Black arrows show the polarizer (analyzer) at 0° (80°); the far-field director () is horizontal. Notice that the tails of the aligned (angled) rods twist with opposite (same) handedness.
Bottom Figure: Schematic of the novel director twisting that surrounds the angled rods, i.e., in a longitudinal mirror plane director configuration around an angled rod.

We are exploring the physics of occlusions, such as micro- and nano-particles/drops, suspended in liquid crystals (LCs).

Since the twist elastic constant in lytropic chromonic liquid crystals (LCLCs) is approximately ten times smaller than their splay and bend elastic constants, suspended particles exhibit novel behaviors. Early MRSEC research demonstrated the spontaneous formation of “twisted tails” that “dress” colloidal spheres and affect its diffusion.1 This year we studied rod-like particles in LCLCs.2 Rods add two new degrees of freedom to the problem, namely, the aspect ratio of the rod, and the mean angle between the rod long axis and the far-field LC director. These added degrees of freedom create possibilities for novel director configurations with potential consequences for rod orientation and diffusion. Our most surprising discovery was that the small twist elastic constant of LCLCs promotes chiral director configurations that modify the natural tendency of rods to orient along the far-field LC alignment axis. Two-thirds of the rods orient at an angle to the uniform far-field director, and only one-third have an aligned equilibrium orientation (see Figure). Normally, rods with planar anchoring conditions align with the far-field director. Using polarized optical video-microscopy and Landau-de Gennes numerical modeling, we elucidate novel director configurations around the rods, as well as the associated angular orientation and diffusion of the rods.

In a different vein, we discovered that nanodrops of fluid situated near the point defect core of a LC drop can induce giant, cooperative spatiotemporal fluctuations of molecular alignment around the central core.3 Theory showed that this phenomenon is a a fundamental new critical behavior associated with a classic topological defect and its confinement geometry that arises when critical boundary conditions are satisfied.