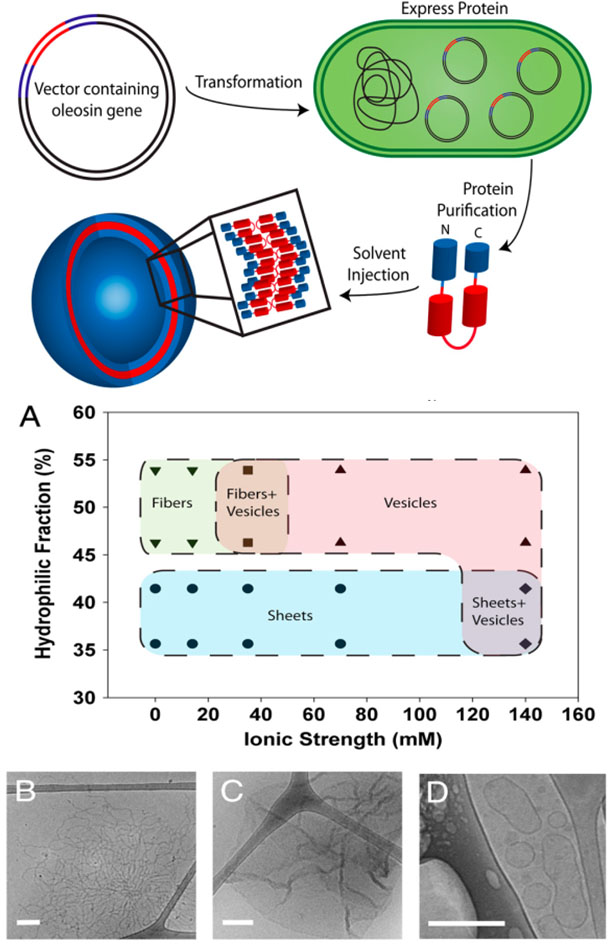 Oleosin variants were made with standard processing techniques from recombinant biotechnology. A. Phase behavior of a series of oleosin mutants, with 65 residues in the hydrophobic core and various lengths of the hydrophilic fraction, that assemble into various structures in solutions of different osmotic strength including B. fibers, C. sheets, and D. vesicles (Vargo et al. 2012), all characterized by cryo-TEM.

For the first time, a recombinant surfactant protein has been produced and assembled into higher ordered structures which could be used to make membranes. Using recombinant amphiphilic proteins to self-assemble suprastructures allows precise control over surfactant chemistry and facile incorporation of biological functionality. From the perspective of polymer chemistry, this is akin to making a polymer in which the identify of every monomer in the chain is set with precision. Multiple variations of the sunflower seed protein oleosin were produced in bacterial cell culture, as illustrated in the upper right. By controlling solution composition and protein chemistry, the recombinant proteins were observed to self-assemble into sheets, fibers, and  vesicles.