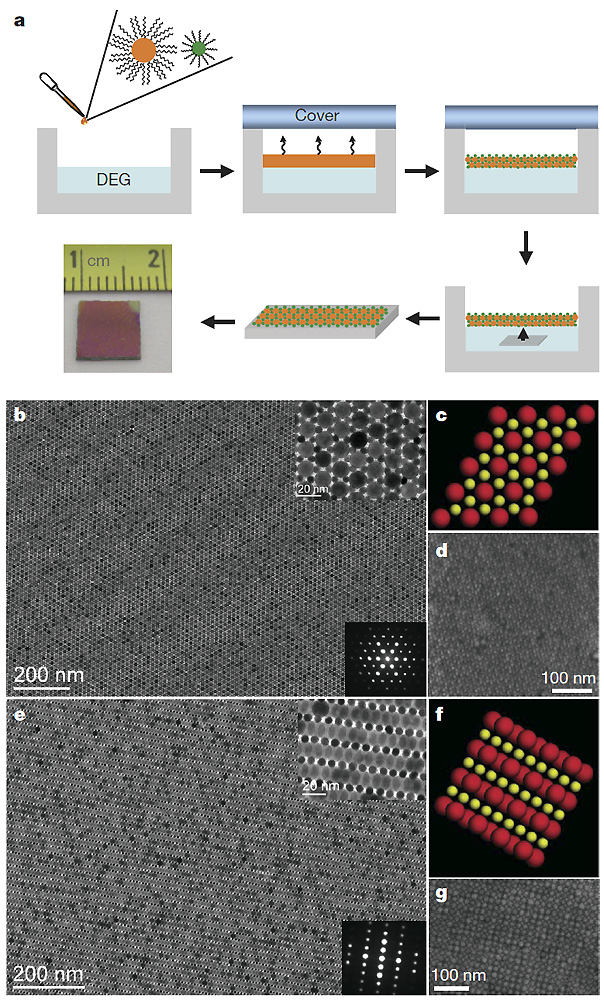 The group of Chris Murray (Seed-1) has pioneered the development of a new class of self-assembled multicomponent materials made from nanocrystals. Superlattice structures are formed in which nanocrystals arrange into three dimensional superlattices with complex unit cells and long-range order. An attractive feature of this method is its flexibility in accommodating a wide range of functional nanocrystalline elements, ranging from semiconductors to metals, oxides to intermetallics, ferroelectrics to ferromagnets, etc. Until now, a limitation has been that the resulting product is not easily integrated into device architectures that often require thin film elements. In this work, the Murray group has developed a general method to grow centimeter-scale binary nanocrystal superlattice (BNSL) thin films, ranging down to single-unit cell thicknesses, which can be readily transferred to arbitrary substrates. BNSLs are formed at a liquid-air interface and are strong enough to survive transfer to a substrate without critical point drying, and to produce freely-suspended BNSL membranes. As a first demonstration, magnetic nanoparticles were used, resulting in a two-component magnetoresistive film. The Murray group has collaborated with the Kikkawa group (IRG-5) to study the magnetoresistance of these large-area (1.5mm x 32.5mm) magnetic BNSL membranes, which clearly show that device magnetoresistance is dependent on the structure (stoichiometry) of the BNSLs. This work surpasses a major obstacle in the utilization of nanocrystalline assemblies, and creates new opportunities for not only for magnetoresistive and other functional BNSLs.