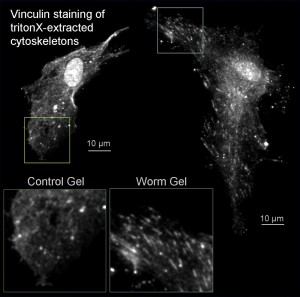 While these cells are on gels of the same stiffness, cells on worm gels have more pronounced focal adhesions and greater area, indicating that they feel a stiffer substrate.

The Experiment:
Culture MSCs on worm-free and worm-embedded PA hydrogels with the same bulk elasticity. Will cells react to the rigid polymer worms or only feel average stiffness? 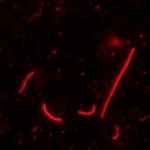 Fundamental understanding of the mechanical environment at the cellular level will help us to predict how stem cells will behave when injected into tissue and to design substrates that will promote better cell/tissue differentiation in vitro. 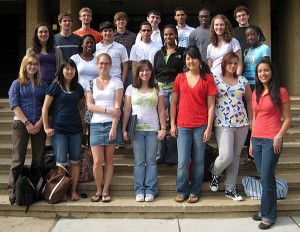 This work was performed by Laura Wertz, a junior at the University of the South, Sewanee, while working with Prof. Dennis Discher, Chemical and Biomolecular Engineering, as part of the Penn-MRSEC REU program on materials. She was one of 24 undergraduates in a 10 week REU program which emphasizes outreach to under-represented groups that include women (50%) and minorities (38%) and which allows students to undertake individual research projects.