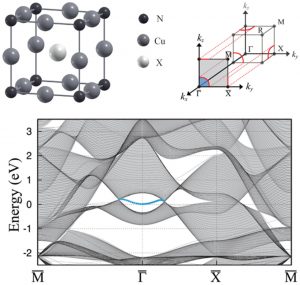 (a) Crystal structure of Cu3NZn. (b) First octant of 3D Brillouin zone (BZ) projected onto the 2D surface BZ of the (100) surface. The DLN and the projected interior of DLNs are shown in red and blue. (c) Electronic band structure of a slab. Bulk bands are black, while nearly flat surface states are blue.

Topological insulators, which were first introduced at Penn, are new materials with novel features such as protected states that hold potential for quantum computing. We have identified a class of 3D crystals that feature a new kind of topological band phenomena: Dirac line nodes (DLN).   These are lines in momentum space where the conduction band and valence band touch, and their degeneracy is required by inversion symmetry even in the absence of spin orbit interactions.

We performed first principles calculations that predict that the real material Cu3N is a DLN material when doped with transition metal atoms such as Zn and Pd.  This material features a band inversion transition as a function of doping in which the line node is a  Dirac circle that emerges and grows near the transition.   The line node phase also features a unique manifold of surface states that are nearly dispersionless on a two dimensional momentum space disk inside the surface-projected Dirac circle.  These states can give rise to an interesting transport and magnetotransport phenomena, in which strong electron correlations can be important.