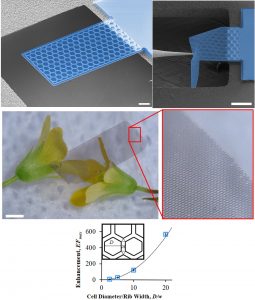 Our plate metamaterials weigh as little as 0.1 g/cm2 and have the ability to ‘pop-back’ to their original shape without damage even after undergoing multiple sharp bends of more than 90 degree.

We introduced the concept of plate mechanical metamaterials [1] and its initial realization in the form of freestanding corrugated plates made out of ultrathin films. We used atomic layer deposition (ALD) and microfabrication techniques to make robust plates out of a single continuous ALD layer with lateral dimensions of up to 2 cm and a thickness as low as 25 nm, creating the thinnest freestanding plates that can be picked up by hand [1]. Unlike unpatterned ultrathin films, which tend to warp or even roll up because of residual stress gradients, our plate metamaterials can be engineered to be extremely flat and can undergo extremely sharp bending. The plates are also more robust than planar films with respect to cracks: instead of propagating though the entire film, the cracks terminate at the vertical walls.