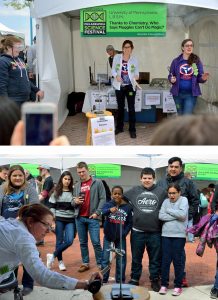 The Philadelphia Science Festival is an annual nine day celebration of science aimed to engage and excite kids of all ages. Each day there are multiple events building up to the Science Carnival, which was held on April 30th, 2016, and attracted approximately 55,000 attendees.

16 MRSEC graduate students participated in the event. The four shown at right, ran a booth titled “Thanks to Chemistry, Who Say’s Muggles Can’t do Magic?”. This Harry Potter themed booth featured an invisibility cloak demonstration, a “potion” activity about pH, an optical illusion demo involving density, and a demo about exothermic reactions using sour patch kid candies in potassium chlorate to create a purple flame.

Surveys showed 68% of the attendees were first time carnival visitors, 88% were made more aware of STEM in their daily lives, 99% would recommend the festival to others, and 80% were more interested in STEM after attending the carnival.