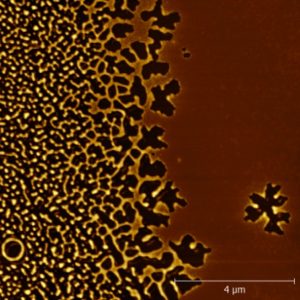 Dewetting pattern of an organic glass thin film with a gradient of thickness. Thickness increases from left to right, resulting in a dramatically slower dewetting rate when the film is held at Tg-12 K.

Measuring correlated dynamics in molecular glasses:  Properties of molecular glasses change as they are made into nanometer sized films. Fakhraai and Riggleman showed that when the film thickness is reduced below 30 nm, the solid glass films become liquid-like and flow. This results in dewetting as shown in the figure.

Fakhraai and Riggleman studied correlation lengths in glassy systems using isothermal dewetting of thin films of molecular glasses along with glass transition temperature measurements. They showed that similar properties are observed in various polymeric films as well as inorganic glasses such as amorphous selenium (in collaboration with Richard Stephens).