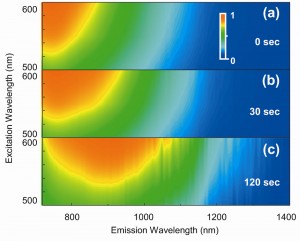 Absorption of visible light by oxidized graphene results in lower energy light emission. Color plots show excitation-emission maps of emission intensity, indicating a shift in the peak emission wavelength as the degree of oxidation is reduced. Times indicate the duration of hydrazine vapor exposure which removes the oxygen.

Networks of carbon atoms have been studied for decades, and are now experiencing a resurgence of interest. Over the last few years numerous researchers have studied graphene, which is a honeycomb-like, flat network of carbon atoms. Graphene is inspiring an exciting vision of carbon-based electronics, as it seems possible that surface topology, modification, and boundaries could serve as design parameters for the development of integrated, multi-functional, nanoscale devices based on this material. Graphene indeed has some remarkable properties—its electrons behave as if they were ‘massless’ and at room temperature its resistance is dominated by quantum effects usually only seen much closer to absolute zero temperature. Here we show that oxides of these materials may possess exciting new optical properties that could lead to new opto-electronic applications.

In a collaboration with the Johnson Group of Penn’s Nano-Bio Interface Center, we discovered that when graphene is oxidized, it becomes a light emitter even when the graphene flakes are in intimate contact with each other (i.e.-layered to form a solid film). Specifically, when graphene oxide absorbs a photon, it emits a photon of an equal or lower energy. Moreover, as shown in the figure, we found that reducing the degree of oxidation gave some control over the band gap. These findings have several important implications. First, they imply that if one were to pattern the oxidation profile across the plane of a graphene flake, that pattern would control the flow of electrical current. Second, our results show that those currents could be manipulated to send off photons to communicate their status. And, finally, theoretical descriptions of these materials need to be expanded, as there is no theory which adequately explains our observations. We have proposed a new idea that could be tested: oxygen goes down in such a way as to distort the lattice in a regular pattern.