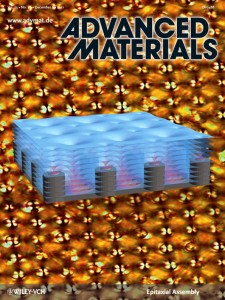 Self-assembly, self-processing, and bottom-up design are ever more important tools for the development of new materials of both fundamental and technological interest owing to their robust capability for generating complex, hierarchical structures. In general, thermodynamically stable, self-assembled structures are governed by entropic and geometric considerations, leading frequently to a limited list of close-packed structures. However, close-packed structures are not always appropriate in device applications. Some control has been gained through so-called graphoepitaxy, which exploits substrates with topological or chemical surface relief patterns that nearly match the domain structures of block copolymers, for instance, and direct their epitaxial assembly into nanostructures with long-range positional order and orientation in thin films. So far, few have achieved epitaxial assembly of highly ordered square arrays.

Because of their geometrical, mechanical, and electronic anisotropy, liquid crystals (LCs) are not only highly sensitive to external aligning fields but can also exquisitely control the propagation of electromagnetic phenomena. Consequently, the patterning of LC molecules has long been of interest for scientific discovery and technological advancement. When LC molecules are arranged into layers with the long molecular axis parallel to the layer normal but no particular positional order in the layer, they form a unique mesophase of LCs, so called smectic-A (SmA) phase. When the surface chemistry promotes planar alignment of LC molecules, smectics-A spontaneously form highly ordered hexagonal arrays of toric focal conic domains (TFCDs) in which smectic layers wrap around a pair of disclination lines formed by a circle and a straight line passing through the circle center. Little is known, however, about a higher level of control of TFCDs into three dimensions (3D). Controlling topological defects and smectic LC phases in 3D is of particular interest to the generation of blue phases and other topologically structured materials which will lead to possibly disruptive display technologies.

Here, Shu Yang, Kate Stebe, Randall D. Kamien, and co-workers, for the first time, demonstrate an epitaxial approach to tailor the size and symmetry of TFCD arrays over large areas by exploiting 3D confinement and directed growth of Smectic-A liquid crystals. By varying the pillar dimensions (size, height and spacing) and thickness of the LC film, thus, the surface energy vs. bending energy of LC layers, we can confine and direct the growth of each TFCD. As a result, we promote a new variety of TFCD arrays beyond the close-packed hexagonal arrangement formed spontaneously on a flat surface by controlling the size and symmetry of the underlying pillar pattern. These arrays can be used for optical steering, band-gap materials, and biological sensors.