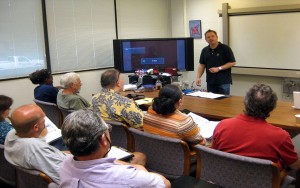 In 2008 The Penn MRSEC assisted a high school science teacher, Schuyler Patton, to prepare a year-long elective course on materials science for his high school, Central HS, Philadelphia. It started with one class of 33 students and it was very successful. In 2010-11, it was expanded to two sections with 66 students. In summer 2010, the Penn MRSEC offered a series of three hands-on workshops for teachers based on the laboratory experiments used in this course. The themes of these workshops were a) thermal properties and b) mechanical properties. A total of 20 teachers enrolled in these workshops, which included lectures and laboratory experiments. Due to their success, these workshops will continue to be given annually.