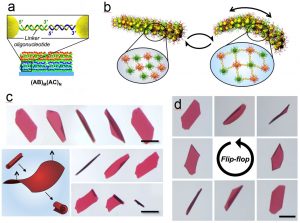 (a) Gold nanoparticles are linked by DNA strands and form thin films. (b) Expanding the DNA strands on one side of the film causes curling. (c) 0.2 mm long films curl and uncurl in response to added DNA commands. (d) Films can be commanded to ‘roll-over’ repeatedly.

The ‘micro-origami’ approach to making microrobotic devices is to form thin films that can fold themselves into desired, dynamically  transformable  shapes.  By combining photolithography, synthetic DNA and gold nanoparticles, MRSEC engineers created thousands of identical micromachines in water that can change their shape in seconds when commanded by the addition of other DNA strands to solution.1  These machines, by curling and uncurling themselves, could roll over synchronously in a controlled manner; such that they all faced ‘up’ or ‘down’ on command.  This operation required two independently controllable types of nanoscale DNA ‘muscles’, and would have been difficult or impossible with earlier micro-origami materials. In the future, these researchers hope to build more complex and capable microrobots to interface with biological systems.