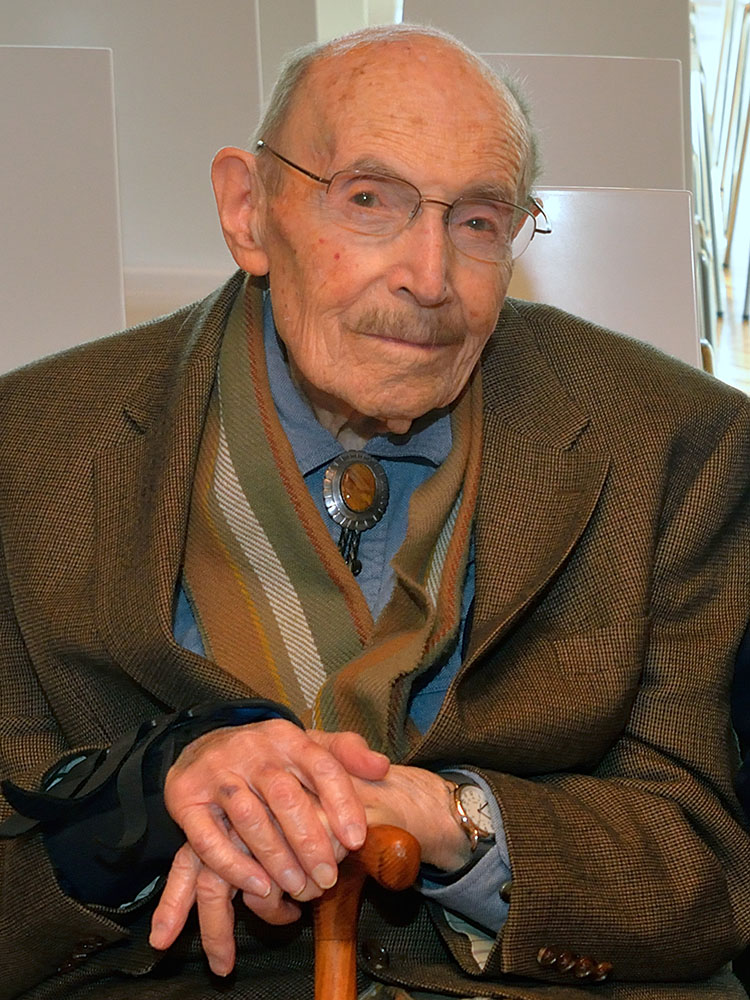 The LRSM lost one of its most distinguished members, Elias ‘Eli’ Burstein, on Saturday, June 17, 2017.  He was 99 years old, only three months short of a century. Eli, Professor of Physics and Astronomy at Penn since 1958, was the grand old man of the Penn materials community. It was he, along with Bob Hughes, Chemistry, Bob Madden, Metallurgy, and Norm Hixson, Associate Dean of Engineering, who founded the LRSM in 1960, as an academically unique, interdisciplinary materials research laboratory. They obtained the first grants for the LRSM from the Department of Defense, and starting in 1972, the materials center has garnered funding support continuously from the National Science Foundation. Eli graduated from Brooklyn College in 1938 and took graduate courses at MIT and Catholic University, but his doctoral studies were interrupted by WWII, although he subsequently obtained four honorary doctorates. He retired in 1988 as Mary Amanda Wood professor of physics and remained active as professor emeritus until he died.

Eli was extremely prolific in a career that spanned seven decades. He did it all. He worked on fundamental studies of infrared photoconductivity in silicon and germanium, and he carried out ground-breaking research on semiconductors, insulators, metals, and two-dimensional electron plasmas in semiconductors. Much of this work improved our understanding of optical properties in the solid state. In his later years at Penn, Eli was known for his work on SERS, Surface-Enhanced Raman Scattering; these SERS ideas continue to influence researchers in present-day metamaterials. Finally, near the end of his career, Eli was deeply engaged in understanding optical properties of fullerenes (buckyballs) and other carbon structures.

Eli trained well over 40 graduate students and post-doctoral fellows, many of whom have had very distinguished careers of their own. He also encouraged dissemination of scientific knowledge by organizing international meetings, conferences, symposia, workshops, and through the literature as Founding Editor of the journal Solid State Communications, being editor-in-chief 1963-1992. Among his many honors, he was elected to the National Academy of Sciences (1979), and he received the John Price Wetherill Medal from the Franklin Institute, the Frank Isakson Prize from the American Physical Society, and a Guggenheim Foundation Fellowship. He was also a Fellow of the American Physical Society, the Optical Society of America, and the American Association for Advancement of Science.

At the LRSM, we have enjoyed his company at our annual “Burstein Lecture,” named in his honor. Eli is survived by his wife of 73 years, Rena, three daughters, Joanna Mitro, Sara Donna, and Mimi Burstein, and grandchildren, Graham and Susanna Mitro.  He will be missed.

If you are interested in learning more about Eli’s life, please explore the following links:
https://en.wikipedia.org/wiki/Elias_Burstein#Honors
https://www.nytimes.com/2017/06/25/science/elias-burstein-dies-physicist.html
National Academy of Sciences Biographical Memoir of Elias Burstein