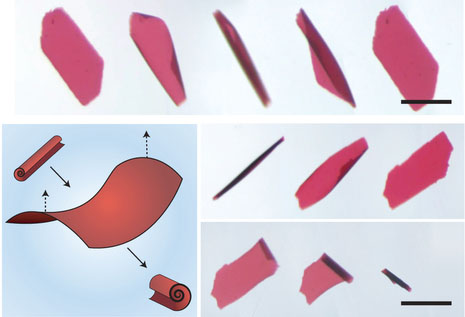 An emerging approach to building microrobotic devices is to fabricate thin film devices that then curl and fold themselves into complex three-dimensional and dynamic shapes, termed microorigami.  DNA is superior to other materials that use temperature or pH to control such shape actuation; by using different DNA strands many different motions can be controlled independently, enabling sequential folding or complex robotic actuations. MRSEC postdoc Tae Soup Shim created the first microorigami devices formed from and powered by DNA, working in the labs of John Crocker and Daeyeon Lee, with advice from David Chenoweth and So-Jung Park.  The work was recently published in Nature Nanotechnology. By combining photolithography and DNA-based assembly techniques, they could create thousands of identical micromachines in water that can change their shape in seconds when commanded by the addition of DNA strands to solution.  These machines demonstrated the ability to flip themselves over synchronously in a controlled manner, such that they all faced ‘up’ or ‘down’ on command.  Such functionality required two independently controllable types of DNA ‘muscles’, and would would have been difficult or impossible with earlier microorigami materials.  The researchers hope to build still more complicated and capable soft microrobots to interface with biological systems.