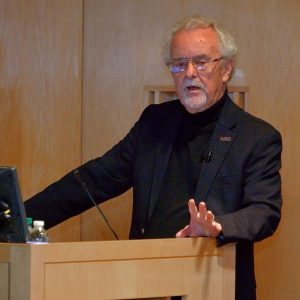 Sadly, our friend, and former director of the LRSM, E. Ward Plummer, died suddenly and peacefully on July 23 in Baton Rouge, LA. Ward was a major player within the LRSM for many years. During his time at Penn, Ward led various interdisciplinary materials “Thrusts” (now called IRGs), and he was Director of the LRSM from 1990 to 1993. After leaving Penn, Ward served for many years on the LRSM external advisory board, until his death.

Ward’s career was exceptional. Before joining the Penn faculty, he obtained his Ph.D. at Cornell (1967) and was a staff scientist at NIST. He spent almost twenty years in our physics department (1973-92).  He attained international renown in surface physics and was known for introducing new techniques and instrumentation, especially in the area of photoemission. At Penn, he rose through the ranks and became William Smith Professor of Physics (1988).  Among his many awards were the Davisson-Germer Prize in Atomic or Surface Physics from the American Physical Society (1986), the Medard W. Welch Award from the American Vacuum Society (2001), election to the National Academy of Sciences (2006), and election to the American Academy of Arts and Sciences (2014).

Ward left Penn in 1993 for ORNL and the University of Tennessee where, in 2000, he became the Director of the Tennessee Advanced Materials Laboratory, a state-funded Center of Excellence. In 2009, Ward left Tennessee and joined Louisiana State University, Baton Rouge, where he became Boyd Professor of Physics (2017) and served as special assistant to the Vice President of Research & Economic Development.

Over his prolific career, Ward authored more than 300 refereed papers, mentored ~40 Ph.D. students and many post-docs as well. He is included in the list of the 1,000 Most Cited Physicists by ISI, but Ward cared most about the people he worked with and wrote “My legacy will be the minds I molded; not the papers I wrote or the prizes I won.” He will be missed.