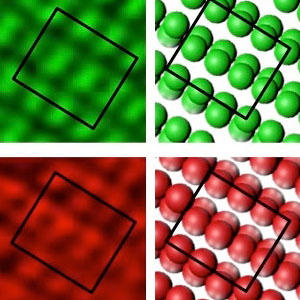 A long-standing goal in material science is to create a material with a complete photonic bandgap, in which light would propagate in a manner analogous to the flow of electrons in a semiconductor. This requires the creation of a very challenging three-dimensional microstructure: an ordered periodic array of highly refractive sub-micron particles arranged so as to mimic the structure of carbon atoms in a diamond crystal. It has long been an elusive goal to form such structures by self-assembly, for example using the ability of colloidal microspheres to spontaneously form into colloidal crystals. Penn researchers John Crocker and Talid Sinno lead an NSF funded project that forms novel colloidal crystals from polymer microspheres covered in interacting DNA strands, and which draws upon technology originally developed by an earlier MRSEC project. Their graduate student Yifan Wang serendipitously discovered the diamond structure crystals in recent experiments, and the results are published in Nature Communications. While significant challenges remain to turn the discovery into an bandgap material, self-assembling the diamond crystals is a significant breakthrough. The occurrence of the diamond crystals is unexpected theoretically, and forming them in simulation has also proven elusive; the team conjectures that the crystals form via the transformation of another, yet undiscovered parent crystal.