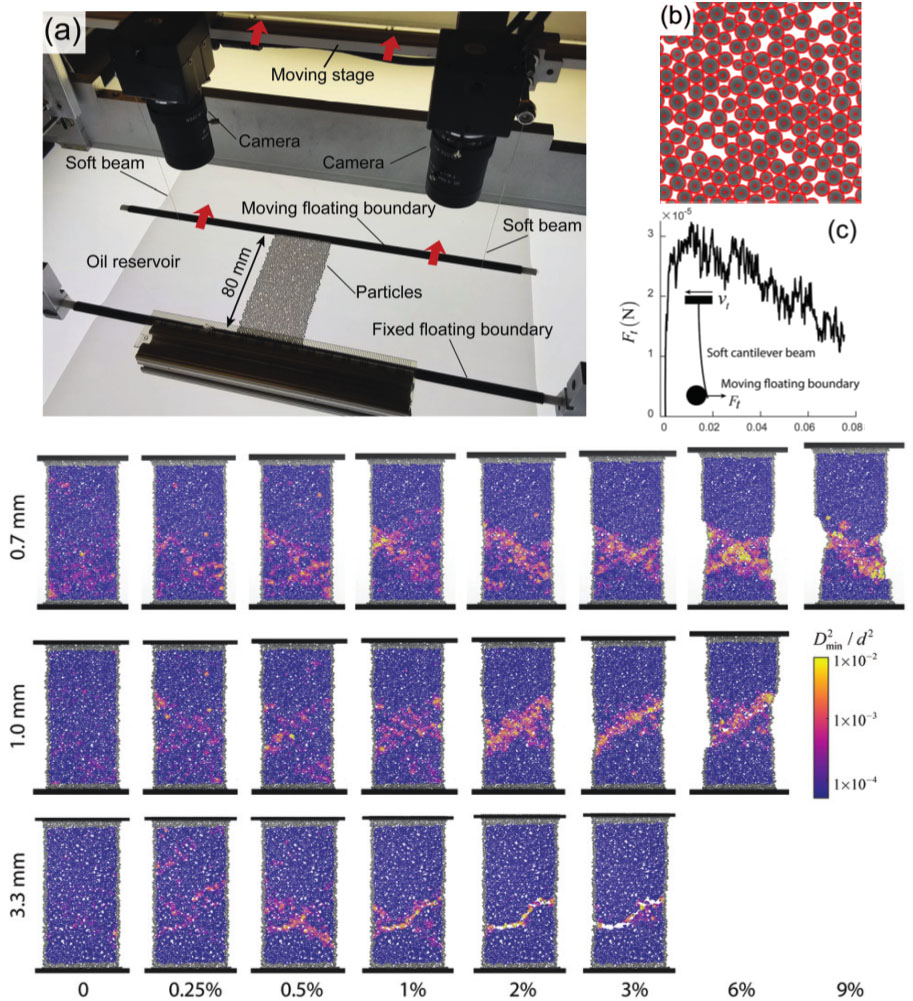 The top left image is a photograph of the experimental apparatus (a), in which floating particles constitute a pillar with 2×1 aspect ratio and are subjected to tensile strain all while tracking particles and measuring stress by deflection of a soft beam. An image with identified particle positions, for a small subset of particles, is shown at upper right (b). Just underneath is an example force versus strain curve (c). The bottom image is a collage of tracked particles, now shaded by the traditional ‘d2min’ measure of local nonaffine motion that reliably indicates local rearrangements and failure. In this image, each row is for a different particle size. It demonstrates that the failure zone is sharp for large particles and progressively less so for smaller particles where the cohesive interaction range is larger than particle size. Thus, the large-particle pillars are more brittle, and the small-particle pillars are more ductile.

The long-standing goal of increasing material toughness and decreasing brittle failure is elusive in part due to lack of model experimental systems in which ductility can be tuned while observing both macro- and micro-scale response of the constituent “atoms”.  We have now created such a system, as illustrated, where ductility is tuned by adjusting the size of floating particles relative to the range of their capillary-cohesion, and where all particles are tracked with high precision while the system is subjected to tensile strain under measured force [1].  The tuning scheme is akin to modifying the sharpness of the minimum in the Lennard-Jones pair potential for oligomeric polymers in a simulated nanopillar [2].  These systems now serve as a crucial testing ground for the development of a new generation of models, which combine Machine Learning characterization of local structure into a classic elastoplastic modeling approach [3,4,5].