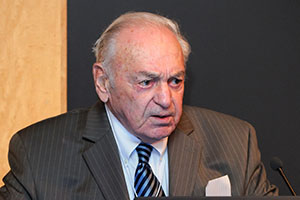 Robert Maddin, one of the four founders of the LRSM, died on March 3, 2019 at age 100. Bob was born in Hartford CT in 1918. He graduated from Yale with a doctorate in engineering in 1948, and he joined the Metallurgy department at Penn in 1955, just after it formed, as Professor of Metallurgy and Director of the School of Metallurgical Engineering, a position he held until 1972. In January, 1973 he was appointed University Professor, a position he held until his retirement in 1983. Along with Eli Burstein, Robert Hughes, and Norman Hixson, he was responsible for the creation of the LRSM in 1960. He was a member of the LRSM Executive committee and was well known for his work on mechanical properties, phase transitions, and defects in metal single crystals, alloys, and metallic glasses. He was also department chair of Materials Science and Engineering (formerly Metallurgy) from 1972-83. In 1983 he joined Harvard as a professor of Anthropology, worked on ancient metallurgy, and was also a curator in the Peabody Museum. The LRSM will continued to honor and remember him, as it has for many years, through sponsorship of the Maddin Lectures which bring prominent materials researchers to Penn.