On May 4, 2012 the Laboratory for Research on the Structure of Matter (LRSM) celebrated its 50th Birthday with a memorable event that attracted over 220 attendees from around the world.  The celebratory symposium and dinner combined historical recollections with the current research at the LRSM.

The central focus of the event was the day-long Symposium (see program below) [ click to view videos of the symposium talks ].  After opening remarks by Arjun Yodh (LRSM Director), Penn Provost, Vince Price, and Penn Vice-Provost, Steve Fluharty, we heard about the birth of the institute from three of our four LRSM founding fathers: Bob Maddin, Bob Hughes and Eli Burstein. Later, we were entertained by stories and memories from former LRSM Directors, including Ward Plummer, Greg Farrington, Don Langenberg, Lou Girifalco, Alan Heeger and Mike Klein, with a special and warming appearance by David White. 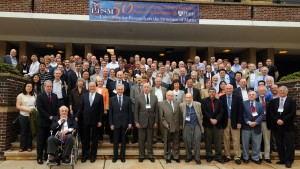 The remainder of our guest speakers spoke about science, new and old.  Leaders of the four current MRSEC Interdisciplinary Research Groups (IRGs) described these programs, and a range of venerable faculty and alumni from the last 50 years spoke about their research and experience at the LRSM.  Among other things, we learned more about surface science, biomaterials, quasi-crystals, topological insulators, scanning probe microsopies, carbon-based materials from conducting polymers to buckyballs, glasses, grain boundaries & dislocations, mechanical fatigue, the new nano-building, protein folding, chemical dynamics, nonlinear optics, education & outreach, and much more.  Of course, there wasn’t enough time for talks about all of the first-rank research in the LRSM, so discussions continued during breaks and meals!  The day concluded with a dinner banquet highlighted with talks from the Science Dean at SAS (Richard Schultz) and the Dean of SEAS (Eduardo Glandt), and spontaneous songs and speeches from audience members including our Associate LRSM Director of many years, Andrew McGhie.

On this page you will find more information about the LRSM, the 50th Celebration program, and some images from the event. For the full gallery of images, click here.

History:
The 50th Anniversary celebration of the Laboratory for Research on the Structure of Matter, LRSM, was proposed to acknowledge the contributions made to the advancement of materials research by the LRSM. The concept of an interdisciplinary materials research laboratory evolved following the launch of Sputnik by the Russians in 1957, when it was determined that the U.S. had fallen behind in the “SpaceRace.”

In 1960, the University of Pennsylvania obtained one of the first grants to foster interdepartmental materials research to rapidly advance knowledge in this important area. Professors Burstein, Physics, Hughes, Chemistry, Maddin, Engineering, and Hixson, Engineering, were the initial Principal Investigators on a grant from the Advanced Research Projects Agency, ARPA, of the Department of Defense, which established the LRSM.

In 1962, a building was designed and built specifically to house the faculty offices and laboratories of several departments and shared central facilities and thus became the first university building in the nation devoted to interdisciplinary materials research. Since 1973 the LRSM has been funded by the National Science Foundation. During the past 50 years of continuous governmental support, many groundbreaking advances have been made at the LRSM including the discovery of conducting polymers; the theory of quasicrystals; and pioneering contributions in soft matter, surface science, nonlinear optics, electronic transport, metallic glasses, polymersomes, dendrimers, synthetic proteins, materials computation, complex oxides and much more.